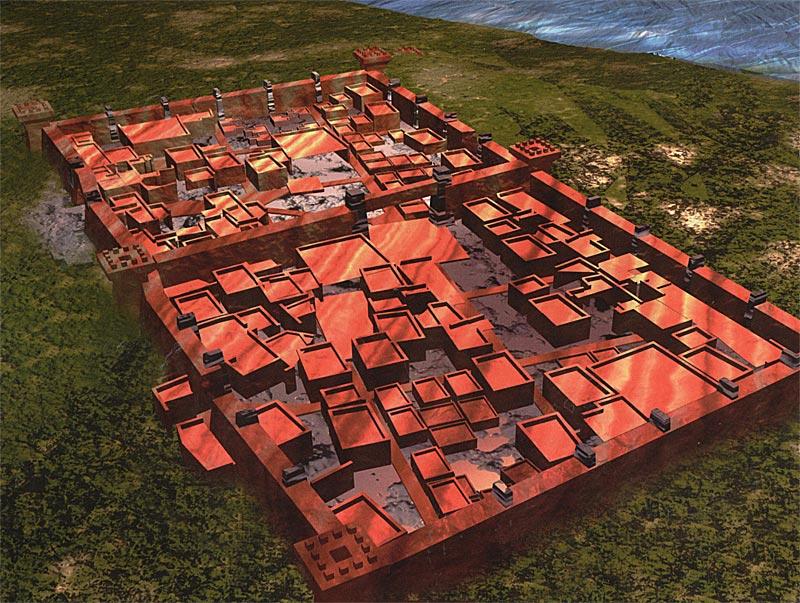 About The Place: Surkotada is a small, 3.5 acre site northeast of Bhuj, in Gujarat, approximately  50 kms from Rapar. It was discovered and excavated by Shri Jagat Pati Joshi of ASI in 1964-1968.

"The mound has an average height of five-to-eight metres (east-to-west) at the time of its discovery. The mound at Surkotada appeared to be a potential site with not only its available rubble fortifications exposed at places on the surface itself but also having an adjacent lower area yielding Harappan and other pottery and antiquities". He continues: "The excavations at Surkotada have been significantly rewarding in unfolding a sequence of three cultural sub-periods well-within the span of Harappan chronology and this fact has been attested to by the dating, i.e. circa 2300 B.C. to 1700 B.C.  The Harappans had a fortified citadel and residential annexe in Period IA and the same pattern of settlement had been maintained through the successive sub-periods IB and IC."

The Harappans came to Surkotadaaround 2300 B.C. and built a fortified citadel and residential annexe, made of mud brick, mud lumps and rubble, containing houses with bathrooms and drains. A new element in the population along with the already extant Harappa is seen in c. 1900 B.C. The newcomers used a coarse red pottery. During this Period, IB, a revetment was added to the fortification of the citadel. Besides house walls the important finds are a heavy copper celt and a chisel and the usual Harappa beads, chert blades, etc.Finally, in Period I C, with the Harappa still living here,another people using the black-and-red ware and a very coarse pottery came to the site.

"Almost all the pottery shapes were in conformity with the material available at other Harappan sites."

"The entrances in the southern and south-eastern sides in the citadel and residential annexe respectively are just simply openings of moderate dimensions without any architectural embellishment."

"The most controversial and sought after animal in Indian archaeology has been the horse," writes the author. "At Surkotada from all three periods [roughly 2100-1700 BCE] quite a good number of bones of horse (Equus Caballus) and ass (Equus asinus) have been recovered" (p. 381).

Horse remains are about 1% of all animal remains, with cattle at 40% comprising by far the most, and sheep and goats the second-most, about half that much; rodents at 6% seem to be the next largest category, with deer (2.4%) and dog (4%) and pig (3%) also found.

There are a large number of plates, mostly black and white.