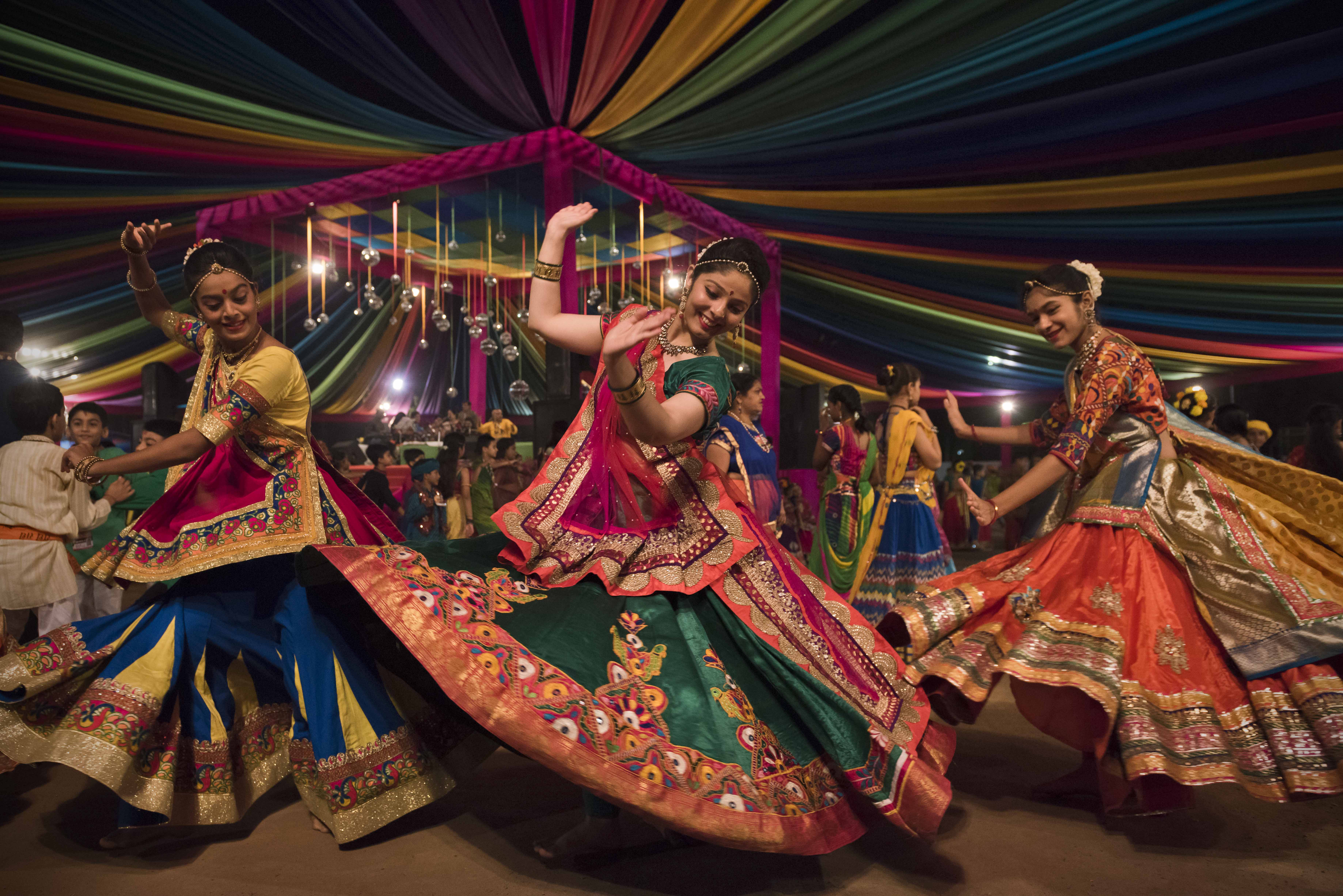 Navratri, meaning 'nine nights', is one of the most popular and widely celebrated Hindu festivals in many parts of India. Gujarat, however, is the only state that erupts into a nine-night dance festival, perhaps the longest in the world. Each night, all over the state, villages and cities alike, people gather in open spaces to celebrate feminine divinity, referred to as Shakti.

The dance form known as ras garba (also joined sometimes by dandiya, which uses small wooden sticks), comes from Lord Krishna's worship rather than Goddess worship, from the Gop culture of Saurashtra and Kutch. Stories of relationships between Krishna and the Gopis, and their emotions, also often make their way into the ras garba music.

Nevertheless, the focal point of every garba circle is the small Goddess shrine erected by each community to mark the beginning of the festival, on the first day of the Hindu month of Ashwin. The shrine includes a garbo, an earthenware pot, in which a betel nut, coconut, and silver coin are placed.

Each night the village or urban neighborhood gathers to perform a puja to one of the nine forms of Goddess. The nine nights are also broken up into sections of three; the first is for Durga, the goddess who destroyed an evil force represented by the demon Mahishasura, and who destroys human impurities; the second is for Lakshmi, the goddess of prosperity; the third is for Saraswati, the goddess of wisdom and art. It is a time to celebrate fertility and the monsoon harvest, represented by a mound of fresh soil in which grains are sown.

After the puja begins the music; it is unmistakable to those who are familiar with the style and irresistible to many. People begin to dance in a circle, whirling away till late into the night. It is not uncommon to find dancers with swords or lit flames and other spectacles.

The traditional dance steps are simple, though over the years people have been inventing more complex steps. Similarly, the music was traditionally acoustic, principally composed of drums and singing, but most people now use amplified sound systems or a blend in the form of a live band with modern instruments. Vadodara is a good place to find the full range of these styles, traditional to modern, acoustic to amplified, simple to complicated, each one represented in its extreme somewhere in the city.

The tenth day, Dashera, also known as Vijayadashami in South India, is celebrated by doing a puja to bless one's vehicle, and is also the day to buy new vehicles, if necessary. It 's also celebrated, probably after getting up far later than usual, by unabashedly eating lots of fafda, a salty fried crunchy snack and jalebi, a sweet fried sticky snack.

Religion and tradition aside, a garba circle can take on a surprising spiritual power. Women often give up certain eatables during these nights, which can be quite a purifying experience, if done right. It is a time for even the most traditional and housebound women to be out of the house and whirling, uninhibited, towards the divinity that hides within her own body. Many of the songs begin slow and gradually speed up, sending the dancers into a trance, especially when the music and dance is in its rawest form. When you come to a garba, wherever in Gujarat you may find yourself for Navratri, imagine this: A circle, or concentric circles, moving around the central representation of a universal creative force, the source of life; everybody performing the same step; a mandala of energetic potential; the Mother Goddess unleashed.

Navratri is celebrated for nine nights, beginning on the first day of the bright fortnight of the Hindu month Ashwin, roughly corresponding to dates in the Gregorian calendar in September/October. This also usually coincides with the end of the rainy season. Dasara/Vijayadashami, is the tenth day of Ashwin.

Garba happens at night in villages and neighborhoods all around Gujarat, so just step outside and follow the booming garba music. Vadodara is considered the cultural capital of Gujarat, and the most sought after location for celebrating Navratri. Try to visit at least one village garba too, for a range of experience.

Religious pilgrimage during this festival focuses mainly in the Shakti Peethas: Ambaji, Pavagadh and Bahuchraji near Mehsana. There are also major celebrations in temples such as Ashapura Mata-no-Madh in Kutch, Khodiyar Mandir near Bhavnagar, and Chamunda Mata Mandir at Chotila on the Ahmedabad-Rajkot National Highway. 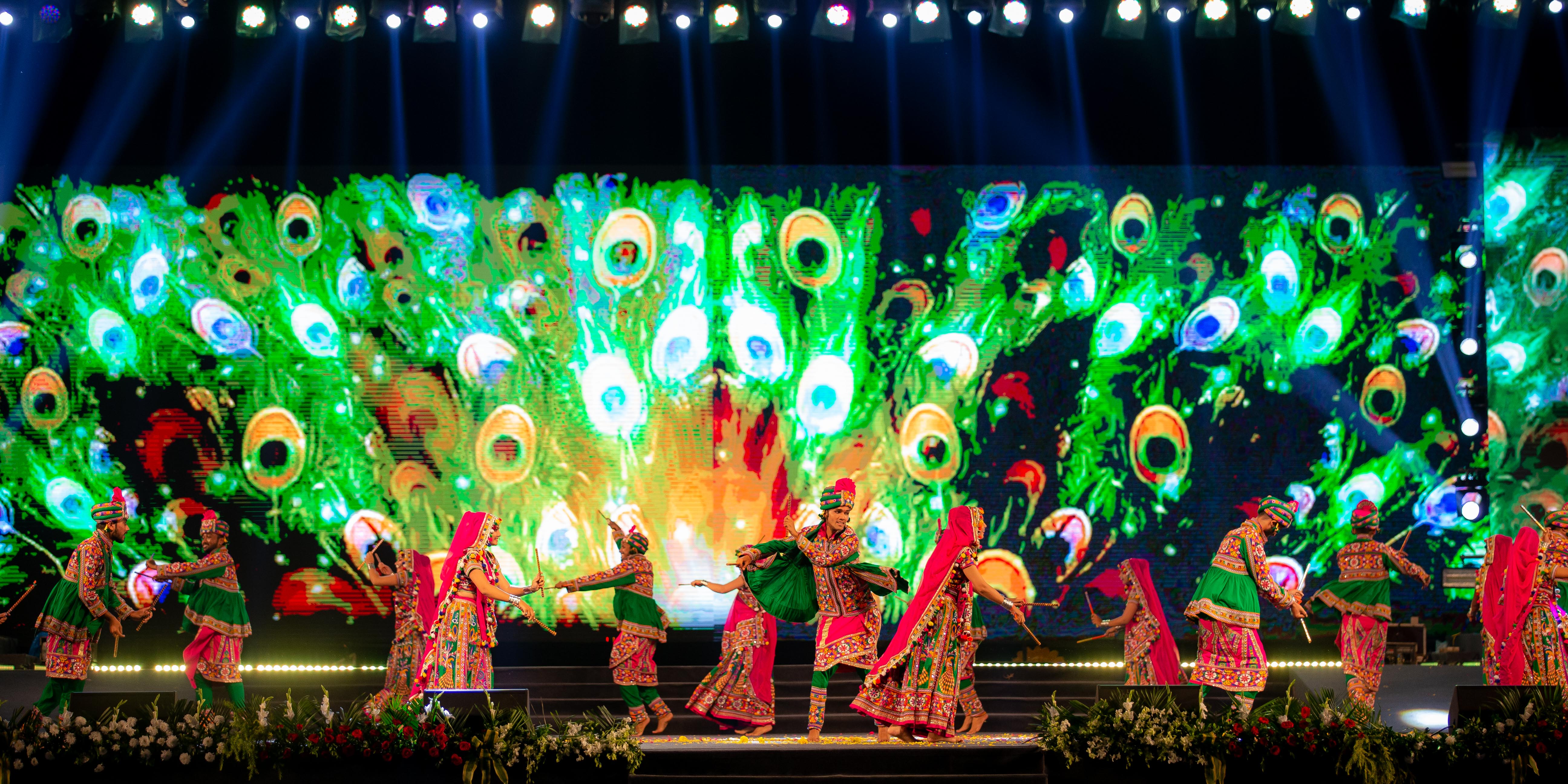 There are many enthralling legends and myths attached to the history of Navratri:

The demon Mahishasur, after being given a boon by the fire god Agni that he wouldn't be killed by weapons bearing masculine names, caused grave destruction and terror. The gods sought the help of Lord Shiva, who advised the invocation of the goddess Shakti. With the gods' prayers, a divine luster sprang from the heart of Lord Shiva and the bodies of all the gods and formed the goddess Adhya Shakti. The gods gave her ornaments, arms and a lion as a vehicle. She fought with the evil Mahishasur for nine long days and nights, and at last, resulted in the beheading of Mahisa on the tenth. The nine nights came to be known as Navratri, while the tenth day was called Vijaya Dashami, the tenth day that brought the triumph of good over the evil.

Sati (also known as Uma) married Lord Shiva against the wishes of her father, King Daksha Prajapati. In revenge, Daksha organized a huge yagna and invited all the gods and deities except his new son-in-law. Sati decided to attend the yagna despite Lord Shiva's attempt to persuade her not to. The King ignored his daughter's presence and publically abused Lord Shiva. Unable to bear her father’s insults, Sati committed suicide by jumping into the yagna fire. However, she was reborn and again won Lord Shiva as her groom and peace was restored. It is believed that since then Uma comes every year with her four children Ganesh, Kartik, Saraswati and Laxmi and two of her best friends or 'sakhis' called Jaya and Bijaya, to visit her parent's home during Navratri.

These legends and story are part of the history that surrounds the festival of Navratri and are going to be around as long as the festival continues.

Event calendar for the next five years

Disclaimer: You are requested to check the exact dates with Gujarat Tourism office before finalising your travel plans for this festival.

Navratri is traditionally a Hindu festival, but it's not unheard-of to find non-Hindus having fun with their friends at a garba. A plethora of varied hues, profusion of design, superfluity of culture, cornucopia of music and dance, all together in the arid lands of Kutch creates a mosaic of exquisiteness which reflects the identity and spirit of the region