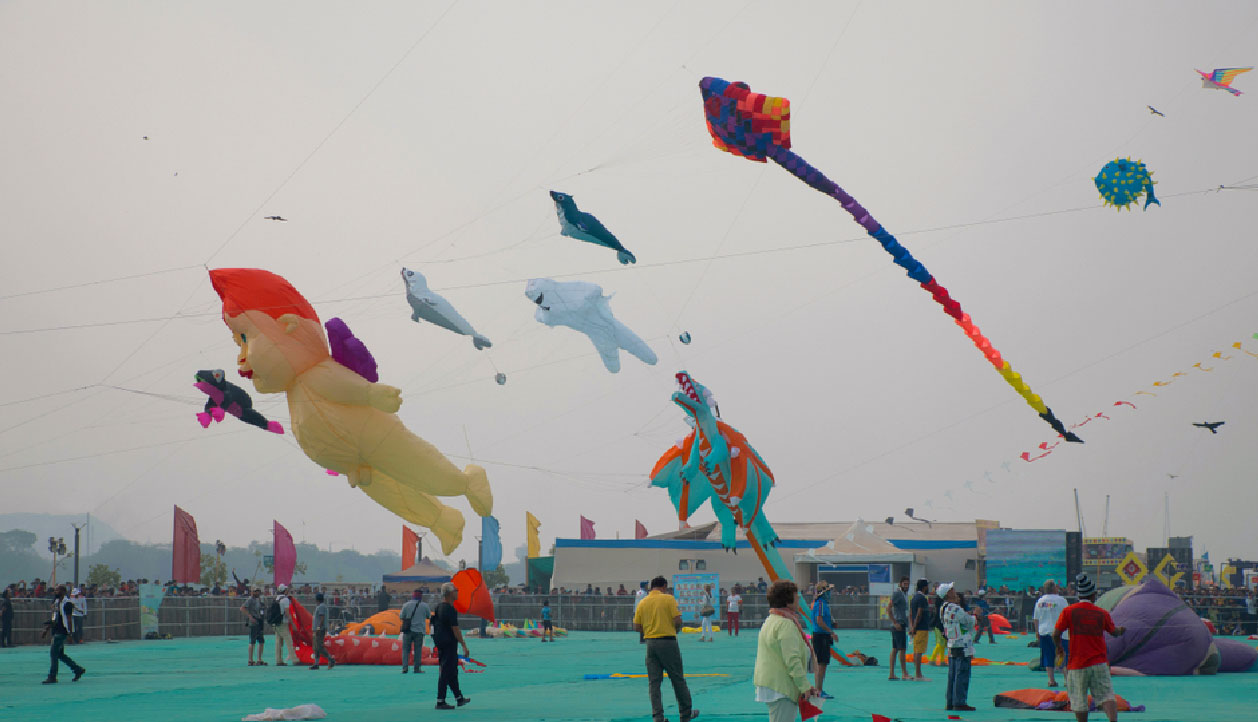 The festival of Uttarayan is a uniquely Gujarati phenomenon, when the skies over most cities of the state fill with kites from before dawn until well after dark. The festival marks the days in the Hindu calendar when winter begins turning to summer, known as Makar Sankranti or Uttarayan. On what is usually a bright warm sunny day with brisk breezes to lift the kites aloft, across the state almost all normal activity is shut down and everyone takes to the rooftops and roadways to fly kites and compete with their neighbors.

Kites of all shapes and sizes are flown, and the main competition is to battle nearby kite-flyers to cut their strings and bring down their kites. For this, people find their favored kite-makers who prepare strong resilient kite bodies with springy bamboo frames and kite-paper stretched to exactly the right tension. Lastly, the kites are attached to a spool (or firkin) of manja, special kite-string coated with a mixture of glue and glass to be as sharp as possible for cutting strings of rival kites. Production of kites and kite supplies can be seen on the streets of Ahmedabad beginning in November, to get ready for Uttarayan, and nowhere more so than in Patang Bazaar, the special kite market that appears in the old city. For the week preceding the festival, it is open 24 hours a day for all kite lovers to stock up for the festivities.

Parents who normally find their children hard to get out of bed for school will find them setting the alarm for 5 am on 14th Jan., to get up and start flying kites in the ideal pre-dawn wind. The atmosphere is wonderfully festive, as whole families gather on the rooftop, special foods like laddoos , undhyu or surati jamun are prepared for eating over the course of the day, and friends and neighbors visit each other for group kite-flying fun. Often people look out for which of their friends has the optimum terrace for kite flying and many will congregate there. This leads to many social gatherings that would not otherwise occur, as one person’s brother’s friends meet their classmate’s cousins, because they have all gathered on the rooftop of the same mutual friend. People often find themselves marking time by Uttarayans: “I met you three Uttarayans ago, right?” is a not uncommon phrase. At night, kite fighters send up bright white kites to be seen in the darkness, and skilled flyers will send aloft their tukkals with strings of brightly lit lanterns in a long line leading back down to the rooftop. From early morning to late at night, Uttarayan provides lots of fun and beautiful sights to remember for a long time.

Uttarayan is celebrated every year on 14th January, known as Makar Sankranti in other parts of north India, and Pongal in Tamil Nadu, and continues on the 15th.

Uttarayan is celebrated across Gujarat, with major centers of kite-flying in Ahmedabad, Surat, Vadodara, Rajkot, Nadiad, among others.  The International Kite Festival is held in Ahmedabad. For information on how to get here for the festival, see the 'Tourism Hubs' pages for the place you want to fly your kites this year. 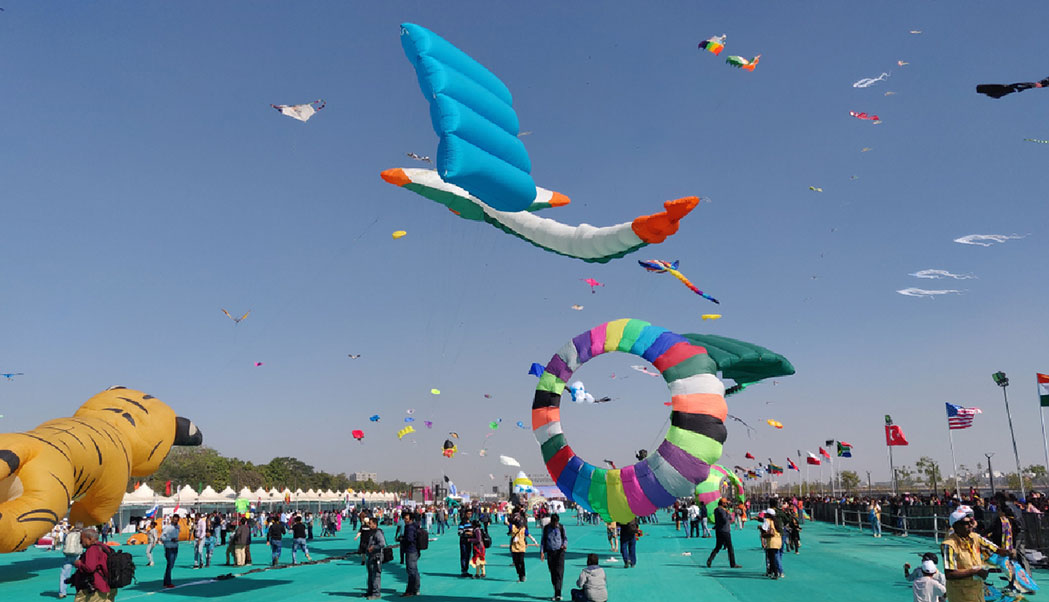 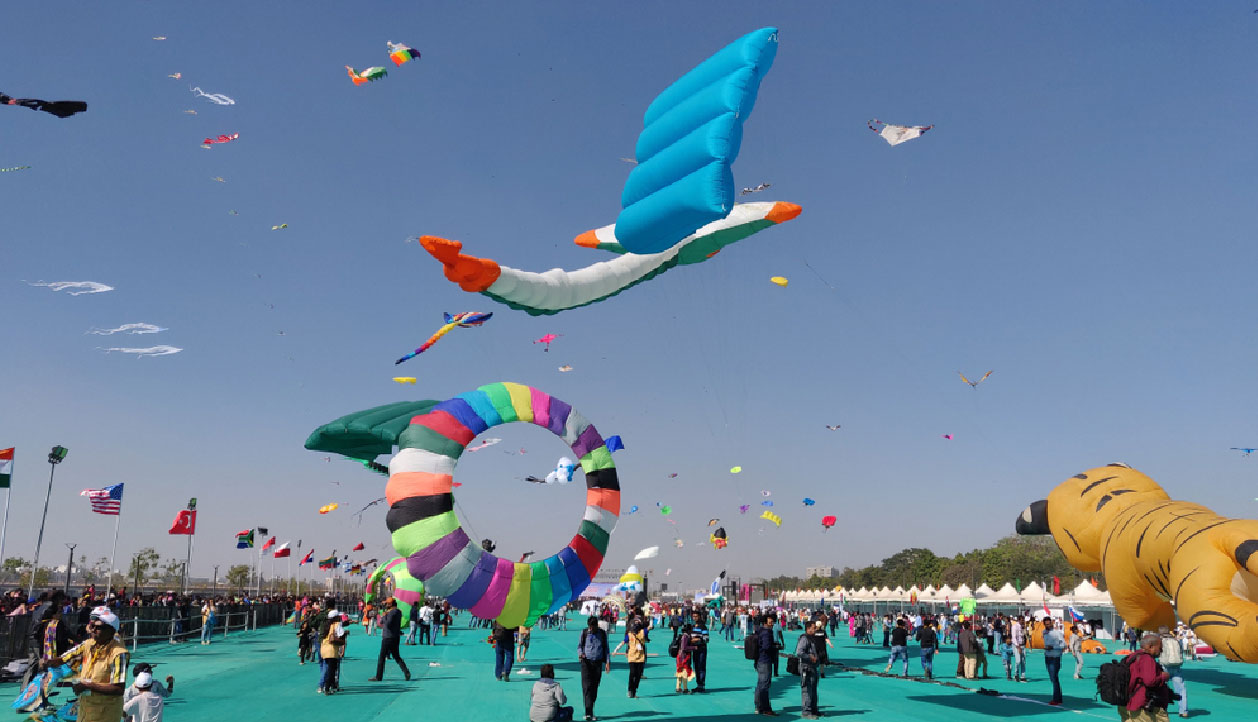 Kites are believed to have first arrived in India either through Muslim traders coming eastward through Persia or Buddhist pilgrims coming from China in search of sacred texts. Either way, they have a long history in the region. Over 1000 years ago, kites were mentioned in song by the composer Santnambe, and numerous classic miniature paintings of typical scenes in the area depict people flying kites. Since Gujarat is at the westernmost edge of India, it is one of the regions where Muslim and Hindu cultures have blended to a great degree in many aspects. Hence, the development of using kites, probably brought by Muslims, to celebrate Uttarayan, a Hindu festival. Still, no one knows exactly when this tradition began.

Though Uttarayan is originally a special day of the Hindu calendar, it is said that the idea of flying kites to celebrate the date was a concept that arrived with Muslims from Persia, and it has now transcended all religious boundaries. No matter what your background or beliefs, if you are in Gujarat in January, you will no doubt find yourself flying kites with everyone else. Visitors come from around India for the celebration, many Gujaratis who live outside the state choose this time to make their trip home, and international visitors have come from countless countries, including Japan, Italy, the UK, Canada, Brazil, Indonesia, Australia, the USA, Malaysia, Singapore, France, China, and many more. 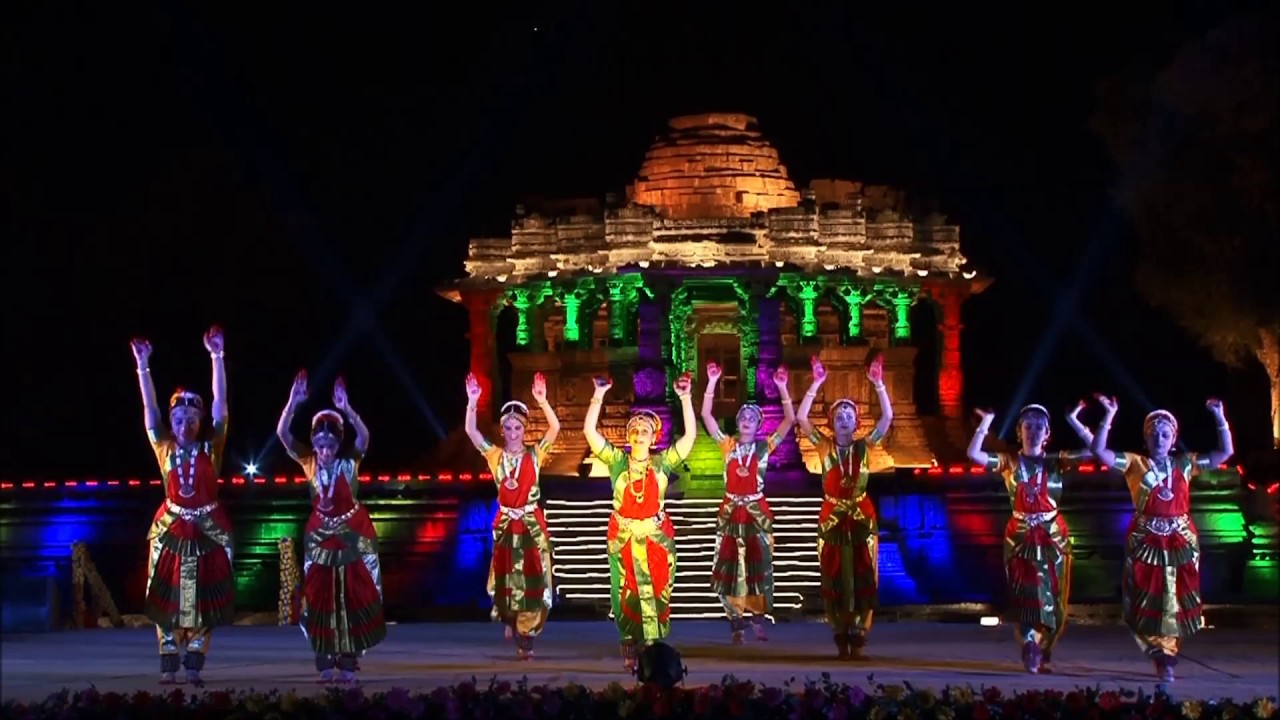 The three day festival of Uttarardh Mahotsavis is organized by the Tourism Corporation of Gujarat Limited (TCGL), to venerate and celebrate the inherited treasure of performing arts of the country. The Modhera festival is an ideal opportunity to experience living heritage of Indian dance and music while traversing back in time sitting in the lap of golden history.